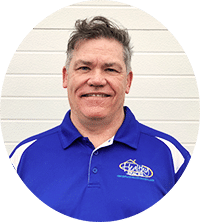 In his spare time, he loves attending music festivals and going to live theater with his wife, Kay. Before moving to Evansville, Mike managed a band in Austin, TX for 4 years. Now, they've also owned Zesto on Franklin since 2009 and Mike enjoys being able to help Kay in the restaurant.

Fun Fact: Mike has been a HAM Radio Operator since 1976 and has talked to other amateurs in 219 countries. He also has written 8 plays!

Customer Reviews
About Me

A New Winslow, IN Basement Finishing...

Wet Basement in French Lick, IN

Montogmery, IN Foundation and Water Problems...more »
Before and after photos from jobs I've worked on:
Back to Previous Page Back to Meet The Team