Well, Hello there! It’s been a while since I’ve been spent a day out with the Service Department, but last Thursday I was lucky enough to tag along with Camera Lara, a Service Technician here at Healthy Spaces. 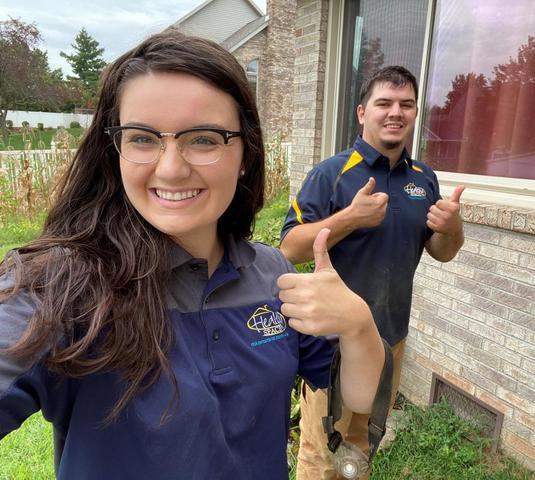 Before we got on the road, Cameron made sure that he pulled all the customer's files that we were visiting today. This helps him be prepared for the day and knows exactly what he is servicing at every customer's home. He also made sure that his vehicle was fully stocked with anything he may need, especially for if he ran into a problem.

On the ride to Mount Vernon, IN, where our first stop was, I learned a lot about Cameron. He has been with the company since February of 2018. Since his first day here, he has learned a lot about the company and himself.  He is planning a wedding and will get married at beginning of October to Angela. For fun, he loves playing in intermural kickball and softball leagues. One of the main reasons that Cameron likes working in the service department is that he is able to detect problems BEFORE they happen.

Before every stop, Cam calls the homeowners about 10 minutes before we arrive to remind them that he’s coming and to let them know that he will be there soon. Upon arrival, he heads to the front door, rings the doorbell, and waits for the homeowners to answer. He puts his mask on, introduces himself, and explains what he will be doing during the customer's inspection and assures them that he will check back in with them to let them know how the inspection went before he leaves.

When we arrived at Mount Vernon, we walked around the home to find the crawl space door. To my surprise, it was an EverLast door that was still in amazing condition.  Unlike wood crawl space doors, EverLast doors will never warp, crack, shrink or require maintenance or painting.  Once Cameron told me the coast was clear of snakes and big spiders, I made my way in. 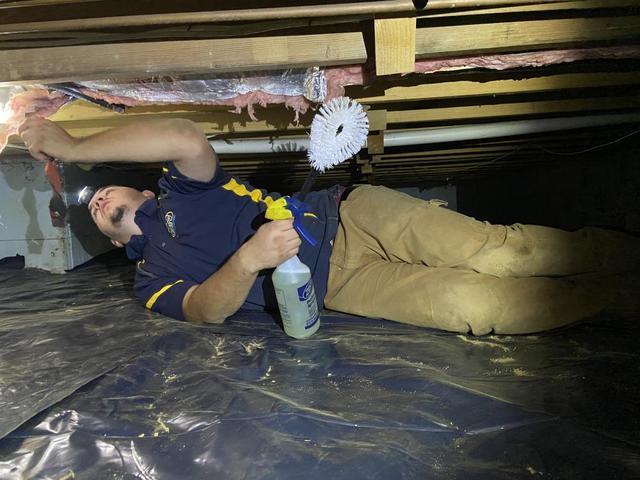 This crawl space had mold issues before they called Healthy Spaces to the rescue, so Cam’s job was to check all the floor joists and make sure there was no mold regrowth. With the crawl space being pitch black, when Cam's flashlight shined up at the floor joists, a shadow would appear if there was mold growth. There was mold in a couple of spots, but they were easily maintainable. During the inspection, Cam also checked the TripleSafe sump pump to make sure it was running correctly and not causing any issues. When he was finished, he went back to the door to inform the customers that he did find a few spots of the mold but assured them he did take care of them. He scheduled their next appointment for the following year and will complete the same steps then.

At the second stop, we headed for New Harmony, IN. This customer had a WaterGuard basement waterproofing system, A TripleSafe sump pump, and a SaniDry Sedona dehumidifier installed back in 2018. Although he’s never had issues since the 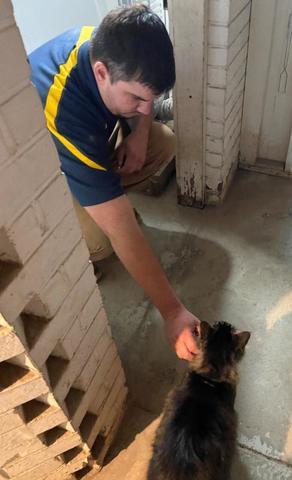 system has been installed, he recognizes how important maintaining his system is. Cameron brought his hose that he keeps in his vehicle inside, attached it to a faucet, found a WaterGuard port, and turned the water on. This flushes out the WaterGuard system of any dirt or debris that might have found its way in, as well as makes sure that the sump pump is doing its job. While the water was running, Cameron gave the sump pump a nice cleaning, inside and out. He also made sure to change the batteries in the alarm, so that they were good for another year. Lastly, he changed the filter in the SaniDry Sedona dehumidifier and opened the front of it to make sure everything was working properly. Cameron let the water run for another 10 minutes or so, while occasionally opening the sump pump and cleaning it some more, and then packed up and headed to our next stop. We had a friendly visitor at this stop, too!

That’s a wrap for today! In my next blog, I will continue to tell you about the second half of Cameron and I’s day out on the job.