Living along the Salt River presents its own unique set of beauties and challenges. I love the sound of the moving water and climate. As a humid subtropical climate, Shepherdsville has hot, humid summers, which is a big change from the dry desert that I grew up in and the mild to cool winters appeal to me because I have always hated driving in the snow.

When my husband and I decided it was time to relocate to a larger home for our growing family, we thought immediately of moving closer to family in Kentucky and Shepherdsville was just far enough from Louisville to feel secluded, but close enough that commuting wouldn't be a huge deal. We honestly never thought about what would happen if, for example, the Salt River were to overflow its banks, or just on a season by season basis what the water table looks like in areas surrounding rivers.

It wasn't until we had been in our 3 bedroom, 2 bath house for 3 months that anything happened to remind me about groundwater in Shepherdsville. It was about 7:30 on a Saturday morning and I'd just gotten my son dressed and was going to start some laundry. I walked down the stairs to our finished basement and my socks were soaked as I stepped on the carpet. The entire basement was leaking and the carpet felt like a giant sponge! I went over to the utility room to check the sump pump and the pit was full, but the motor didn't appear to be working.

Thankfully, I had just heard about a company called Healthy Spaces. They specialize in leaking basements, groundwater intrusion, and perimeter drain systems. I had one of their basement specialists out and I learned so much! 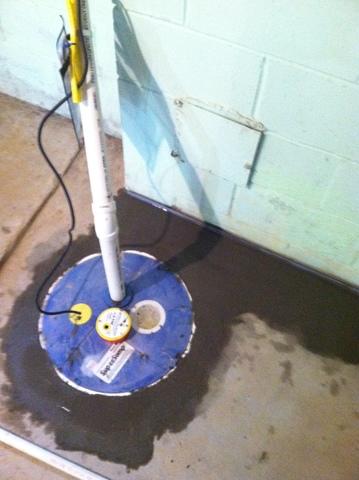 1. That concrete has a wicking capability referred to as capillary action that actually draws surrounding moisture in the ground into the basement?

2. That Shepherdsville, KY experiences seasonal groundwater intrusion because the water table throughout our area is very high?

3. There are sump pumps that have back up pumps, batteries, and alarms to tell you if they quite working?

Given the amount of water that had wicked into my basement, we elected to install a full perimeter drain system called Waterguard. I liked the features of this drain system compared to others. Mainly, I liked that it wouldn't clog with silty clay because it sits on the foundation footer. I also liked that it would capture wall moisture and direct all that water out of the basement. The best part of the whole system was the sump pump. First off, it's got a really safe cover with a drain in the lid. I realized that my son couldn't pry off the lid and fall in. Additionally, there's a WaterWatch alarm that will notify me if something goes wrong!

It's now been 2 and half years since we had our Waterguard installed and our basement has been leak and flood free ever since! If you're in the Shepherdsville, KY area and your basement or crawlspace is leaking or actively flooding, call Healthy Spaces today!

Cassi holds over 15 years experience in the construction, real estate, and education industries. She is certified in foundation repair technology, soil dynamics, and system design from the Foundation Supportworks Institute.

Case Study: Brightwall and Waterguard Installation in Shepherdsville, KY
Back to Previous Page
Back to News & Events