4 Waterproofing System Must Haves in Evansville, IN 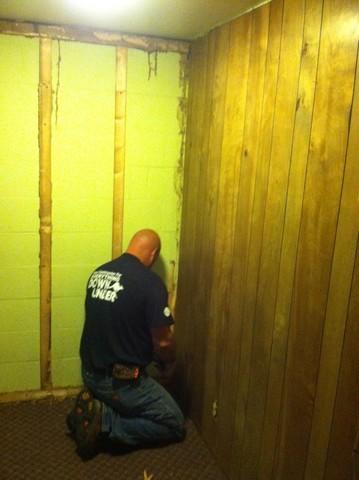 Now that I have decided that I need a dry basement, I’ve been studying up on what a basement waterproofing system consists of and how it should work best. My final area of focus was the waterproofing trench system. I wanted to know everything I could about what makes a really efficient, effective interior drainage system. I found 4 major items that all waterproofing systems should have:

I discovered rather quickly that I can’t afford to have the perimeter of my home dug up from the outside. Excavation costs to dig up around the foundation and down about 8 feet is entirely too expensive for my family right now. On top of that, I discovered that many exterior systems can be crushed by the backfill and compression steps of an exterior installation. Add in the cost of re-landscaping my entire property and I’d need to win the lottery to afford the work.

Therefore, the most cost effective and promising solution for me is to have an interior waterproofing system installed in my home. It’s a fraction of the cost of exterior work and it’s going to have a much smaller impact on my Evansville home—other than keeping it dry and mold-free!

The placement of an interior waterproofing system is the next most important indication of how successful the system will be. I have had waterproofing companies offering to install systems through the middle of my floor, ignoring the perimeter of basement. I knew right away that a lateral only installation is not sufficient because it wouldn’t capture the main water intrusion at the joint between my walls and floor. Obviously, I need a perimeter drainage system.

What I discovered separates the long lasting systems from ones that aren’t going to be around very long was how they were installed along the perimeter. The best systems out there sit on the foundation footer, than in the mud under my slab. They won’t clog and fill up with dirt this way and they are able to be more snugly installed along the exact footprint of my foundation.

3. Ability to be inspected and serviced

Next, I know that once I have my basement waterproofing system installed, I want to be able to see that it’s working and check the system when it isn’t. I want a waterproofing system that has inspection ports so I can see the water flowing through the system. I also want a system that can be serviced and maintained seasonally. Even better, I don’t want to have to be the one doing it, so a company who will schedule annual maintenance is a real must for me.

Finally, I want a system that can capture both the water leaking in from my walls and seeping up between the joint at wall and floor. I discovered that the Waterguard system has holes along the side to capture ground water and a flange that rests along the wall to direct water from leaking walls into the system, too.

Article: What Is the 'M' Word And How To Avoid It
Back to Previous Page
Back to Technical Papers