Leaky Basement Windows in Odon, IN 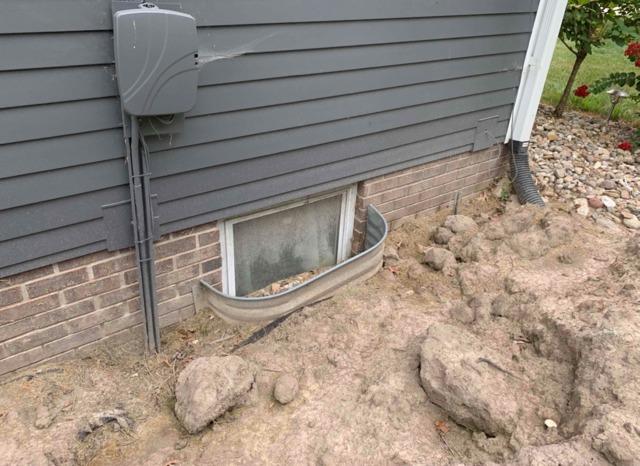 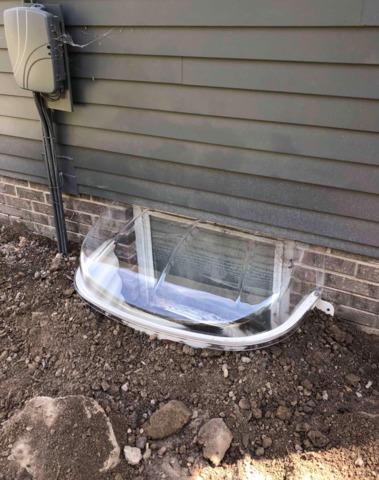 Homeowner Rita, from Odon, IN had a finished basement that would leak water. Having window wells that were over 25 years old and uncovered made an easy path for water to leak in. Since the basement has low air pressure (sucking air in), the cold winter air or warm humid summertime air is pulled into the basement. You end up paying more in heating, cooling, and dehumidification costs than if you were to replace the windows.

Rita gave Healthy Spaces a call and Design Specialist Jake Stilwell, quickly came to evaluate her basement windows. He concluded that Rita would need 5 new EverLast basement windows, along with our SunHouse window enclosures. EverLast windows are all vinyl so they'll never rot, rust, or need to be painted. They also have double pane glass and good weather stripping for warmth and comfort. Our SunHouse basement window enclosures feature a sturdy, clear cover that fits nicely and a bottom that prevents weed growth, keeps leaves, debris, and rain out. The best benefit of the SunHouse for Rita to enjoy is that it allows more sunlight to bounce into her basement giving her natural sunlight. 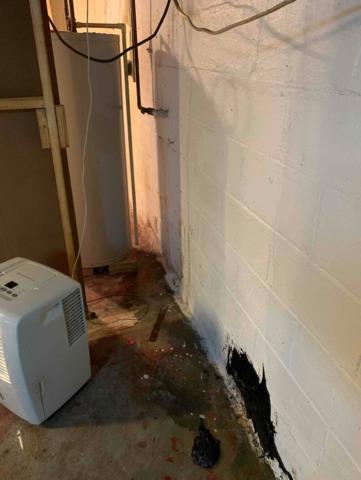 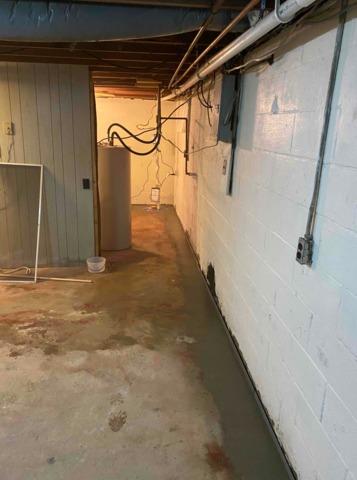 This Reynolds Station, KY basement was having water issues that the homeowner couldn't keep up with. He would always have to plan what he was doing around the weather forecast to make sure he could be home or have a backup ready if water leaked into his basement. Tired of a wet basement, the homeowner decided to call Healthy Spaces for a permanent solution.

Our System Design Specialist, Jason Dausmann, met with the homeowner to discuss his issues. Jason completed an inspection of the basement and designed a plan for this basement that was sure to keep it water-free. From there, the installer crew got straight to work. The solution to this basement was to install a full perimeter WaterGuard system to prevent water to enter the area. This system is installed around the perimeter of the basement and will collect water internally and channel it to the sump pump. The sump pump will then discharge the water away from the home.

The homeowner is very pleased with his try basement!

Leaking Basement in Jasper, IN 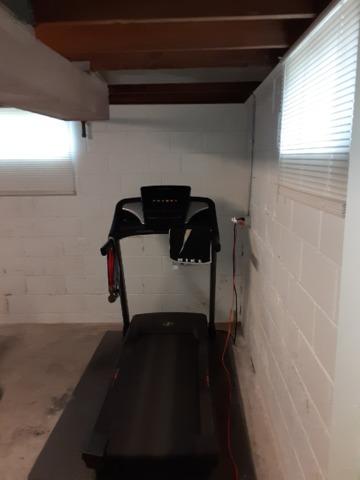 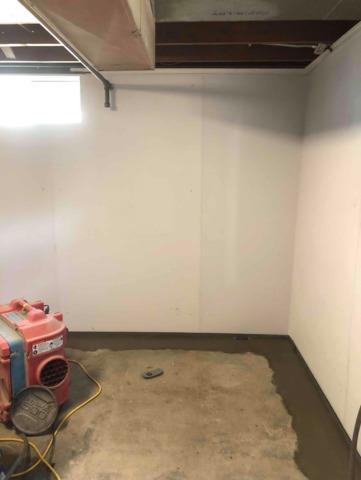 Homeowner Kyla K. from Jasper, IN was experiencing water in her basement. She dreaded hearing the weather forecast, especially when it called for rain. With every rainfall, water would slowly creep into the basement. They bought fans to constantly run after storms to dry up the sitting water. She chose to add optimism to the problem, believing it would either go away or fix itself, but unfortunately it didn’t happen. They had dealt with their dreadful basement for quite some time and finally decided that it was time to call for help.

System Design Specialist, Bob Roberts, sat down with the homeowner and gave her a same-day quote after his thorough inspection. The WaterGuard drainage system that Bob recommended seemed like the best fit. With this system, there are spacers against the wall make a neat finished look and keep dirt and debris from the floor out of the gap, while also directing water to the new TripleSafe sump pump. The sump pump would then redirect water outside through exit lines.

Now, Kyla can enjoy her water-free basement and can listen to the weather forecast without being alarmed when there was rain in the prediction.

Water Intrusion in Basement in Huntingburg, IN 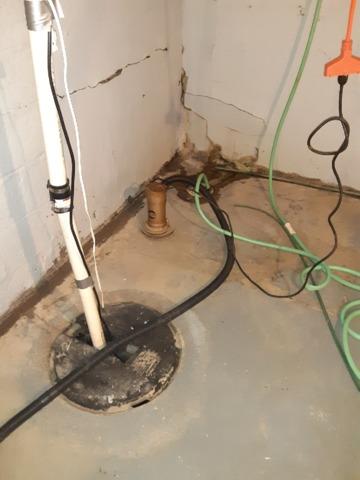 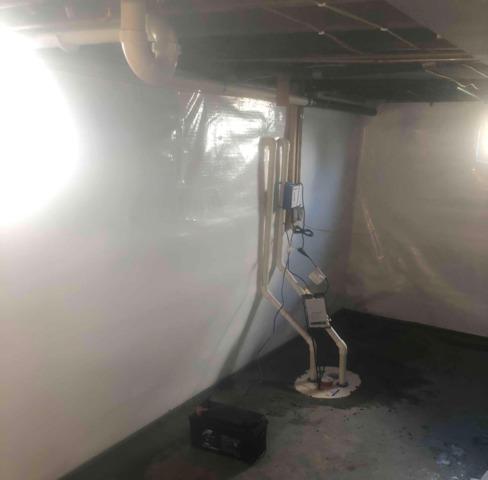 This Huntingburg, IN basement had an older sump pump that wasn't able to keep up with water when it rained heavy. Homeowner Ruth, feared the worst for items in her basement every time the forecast called for rain. After too many sleepless nights Ruth's neighbor refered her to Healthy Spaces.

Design Specialist, Bob Roberts, after doing a thorough inspection of her basement worked with Ruth to design a system that worked best for her. Crew leads Shawn Brown and Robbie Stoutenberg, installed our WaterGuard along with our TripleSafe sump pump system. WaterGuard is a piping system engineered specifically to solve basement water problems effectively without worry of clogging from soils under the floor. The TripleSafe drains water from the WaterGuard and from below the basement floor it discharges it out of the basement. Included with the TripleSafe are two reliable cast iron Zoeller pumps and a battery back-up pump. Installing WaterGuard with our TripleSafe sump pump system will keep Ruth's basement clean and dry for many years to come giving her peace of mind when the forecast calls for rain.

Damp Basement Walls in Huntingburg, IN 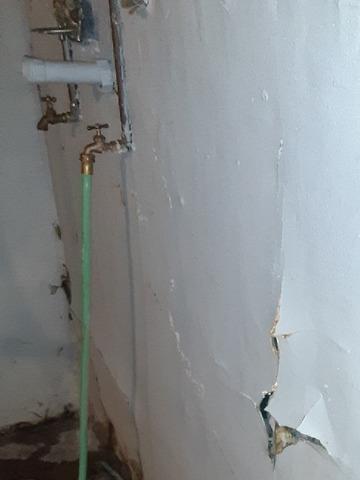 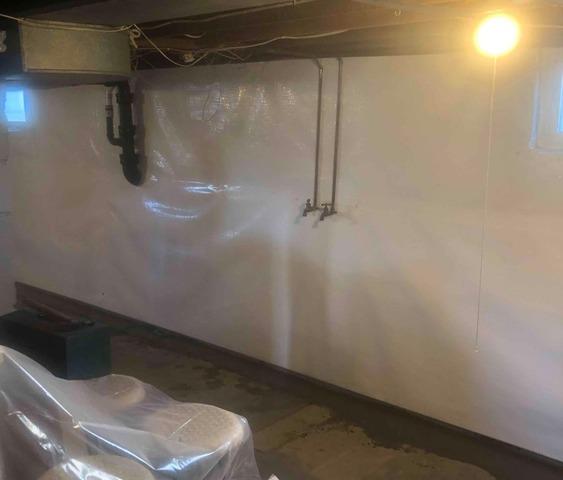 Cold air and moisture were preventing this Huntingburg basement from having walls that they loved. After homeowner Ruth, had her basement waterproofed with our WaterGuard drainage system and a new TripleSafe sump pump, she could then think about upgrading her basement walls.

Crew leads, Shawn Brown and Robbie Stoutenberg, installed our CleanSpace Wall System in Ruth's home. CleanSpace is a heavy, durable plastic liner for lining stone wall basements. The CleanSpace wall system stops water vapor from permeating walls and drains wall leaks, and brightens up your basement. With anti-microbial protection called UltraFresh built right in, no mold or mildew will grow on the CleanSpace! This Huntingburg homeowner will never have to worry about her walls chipping, peeling, or flaking away thanks to Healthy Spaces installing our CleanSpace vapor barrier.