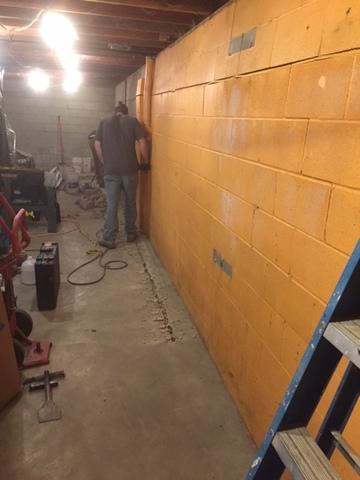 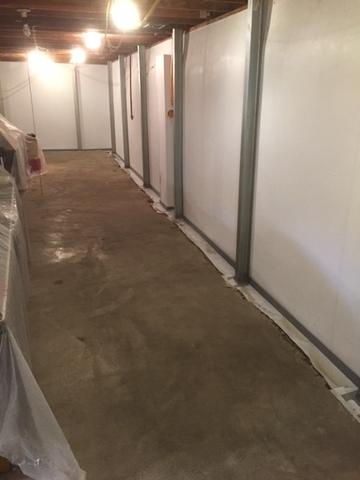 These Henderson, KY homeowners were very concerned about the stability of their foundation wall.  It was bulging out due to swelling soils.  The soil was swelling because groundwater was present.  That created another problem--leaking walls.  The homeowners met with Damon Cheatham of Healthy Spaces and together, they designed a cost-effective, custom solution to both problems.

First, the installation team would jackhammer out a trench around the perimeter of the basement to install Waterguard, a french drain-like system, that would capture the wall and floor moisture and direct it into a sump pump to be removed from the basement.  Second, the installers would place a wall moisture direction system called Brightwall on to the walls.  This will direct the wall leakage into the Waterguard before it comes into contact with the interior basement air.  This will keep the relative humidity lower and reduce the risk of mold growing in the basement.  Brightwall also has the added benefit of making the basement look brighter and cleaner--a real wow experience!  Third, the installation team installed several Powerbraces along the wall to stablize and reinforce it.  The Powerbraces are secured at the top and bottom to provide a rigid and structually sound reinforcement to the block wall.  As you can see, it looks like a completely new basement.